I’ve got a couple outside compartment doors that won’t stay up. George (Yates) had told me about the price he paid for new gas lift struts he got for his outside storage doors at RV Lifestyles in Quartzsite. Compared to prices I’ve seen in Canada, $13 US each is very cheap. I went in to RV Lifestyles to pick up a couple struts. I came back with 4 of them and replaced struts on 3 of our doors with one to spare. Wow, what a difference. I should have done that a long time ago. Its actually quite easy to do. Just a few minutes to change each strut.

Monday afternoon we went as a group to Silly Al’s Pizza in Quartzsite. It’s a really busy place and since they don’t accept reservations you have to get there early in order to get in without having to wait in a long line. Of course that also means that you’re eating supper fairly early. The pizza was great and fairly inexpensive. Beer was $2.50 for a draft beer and $3.25 for a glass of Chardonnay.

Tuesday morning we headed off to the dump station to dump tanks and refill water. There is always a line up to use the station but this time it was fairly short so we got that done without too much waiting. I headed in to Quartzsite after lunch to see if I could get a tilt kit for one of my solar panels to try out. They were a little more money than I had planned but I bought 1 to try. Also I needed a part for our water heater so I picked up what I needed at RV Lifestyles.

Happy Hour was a little earlier today and we had a neighbour lady stop by. She had seen Bill’s Canadian Flag flying from the flag pole on his RV. Shirley is from P.E.I. and she stayed and visited for a while.

After supper we got together with Bill and Patsy and Rob and Pat for a game of Wizard. I hadn’t heard of this game before but we enjoyed playing. It had elements of Euchre in it with a few twists.

Weather has been very nice the last couple of days. Winds have died down quite a bit and over night temperatures have been comfortable. Glad we’re not in Ontario right now. I’ll be back with another post in a few days. Bye for now.

The last couple of days here have been quite warm, in the low 20’s C. Saturday we went to a Canadians’ Potluck for lunch. There were close to 200 people there from various provinces. Alberta, British Columbia and Ontario were most heavily represented. There were even some who were from NFLD. We all had to bring a salad or a dessert and drinks and a Roast Beef Dinner was provided. The cost was only $3 per person which was a great deal.

In the afternoon we went to a blogger fest. About 20 people were there, most of whom were bloggers. It’s a way for fellow bloggers to connect with each other. Most followed each other’s blogs and had known each other for some time. We enjoyed meeting more new people. Of course Happy was at 3:00 so we were back in camp in time for that.

Sunday was a relaxing day. Very warm and very little wind compared to some of the other days. I spent part of the morning trying to figure out how to use WordPress more effectively with my blog. I did a couple of little maintenance jobs on the Motorhome in the afternoon. Our pocket doors had become difficult to move so I put some silicone lubricant on the tracks and that seemed to help. It took me a while to figure out how to remove the doors from the tracks, but once I had them off it was easy to spray the rollers. I removed one of the gas lift struts from the door of one of our outside storage bays and I’m going to see if I can get a replacement for it in Quartzsite. There are a couple of doors that won’t stay up so I want to get that fixed.

Happy hour on Sunday was full of laughter. We had a great time together. We were discussing plans on where we were going after we leave Quartzsite. The group will be splitting up for a while but we plan to reconnect in the weeks ahead. We’ve met some great people this week; Bill and Patsy Richards, Ron and Pat, Tom and Deb Duchaine, George and Rose, and of course our friends George and Suzie Yates. I think we’ve all had a great time together. We were the outsiders to the group when we arrived but they all made us feel very welcome. 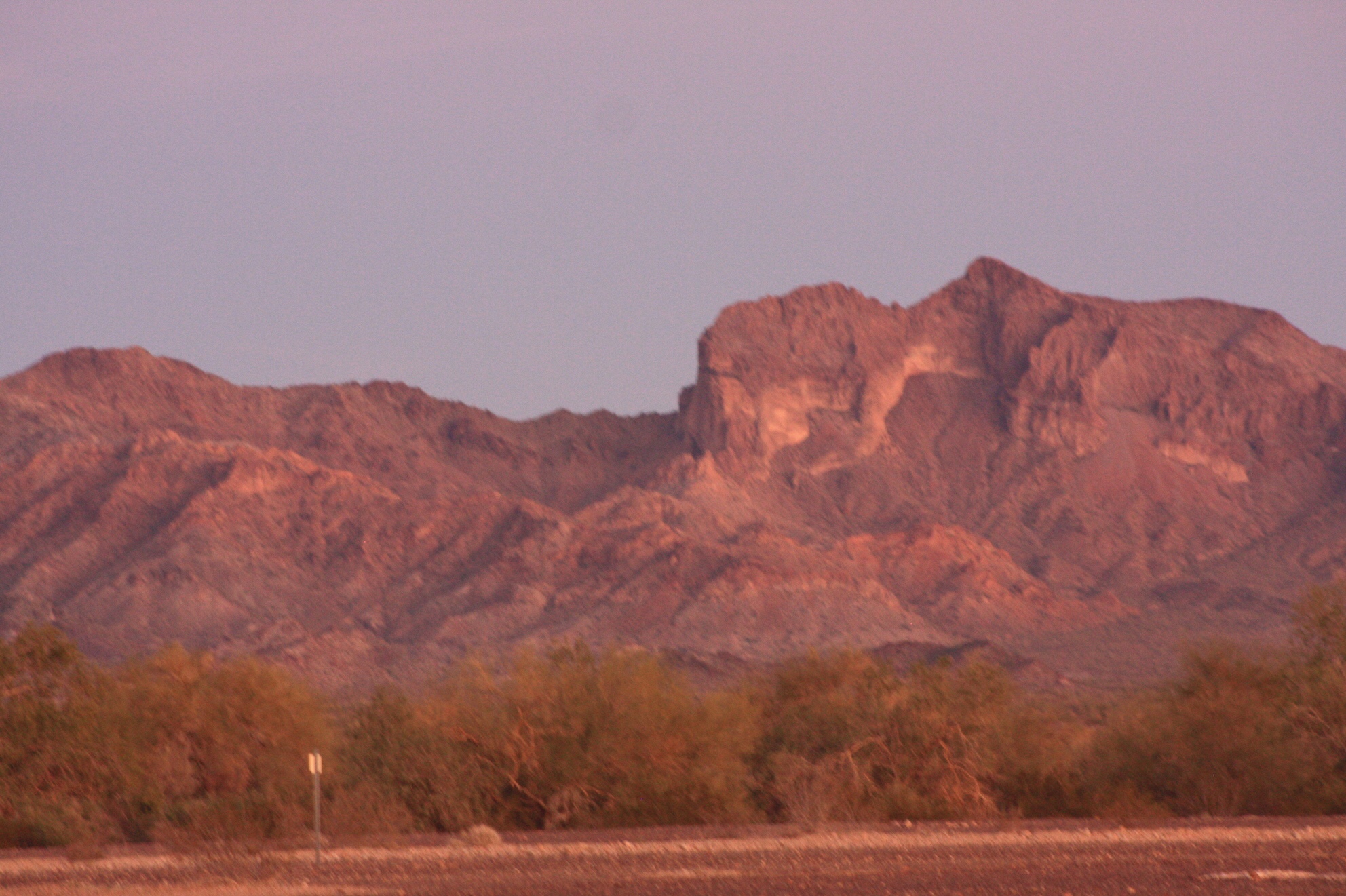 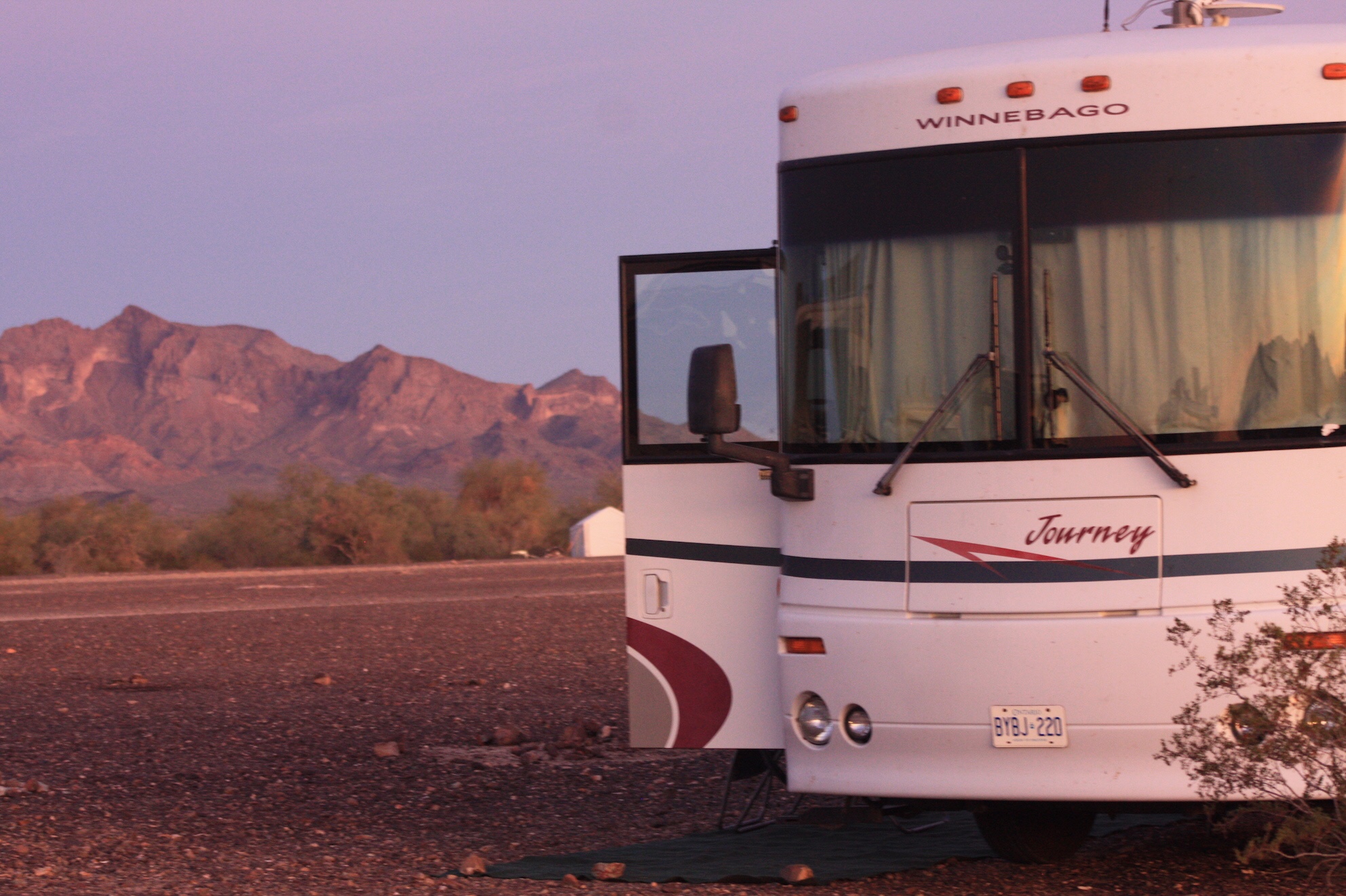 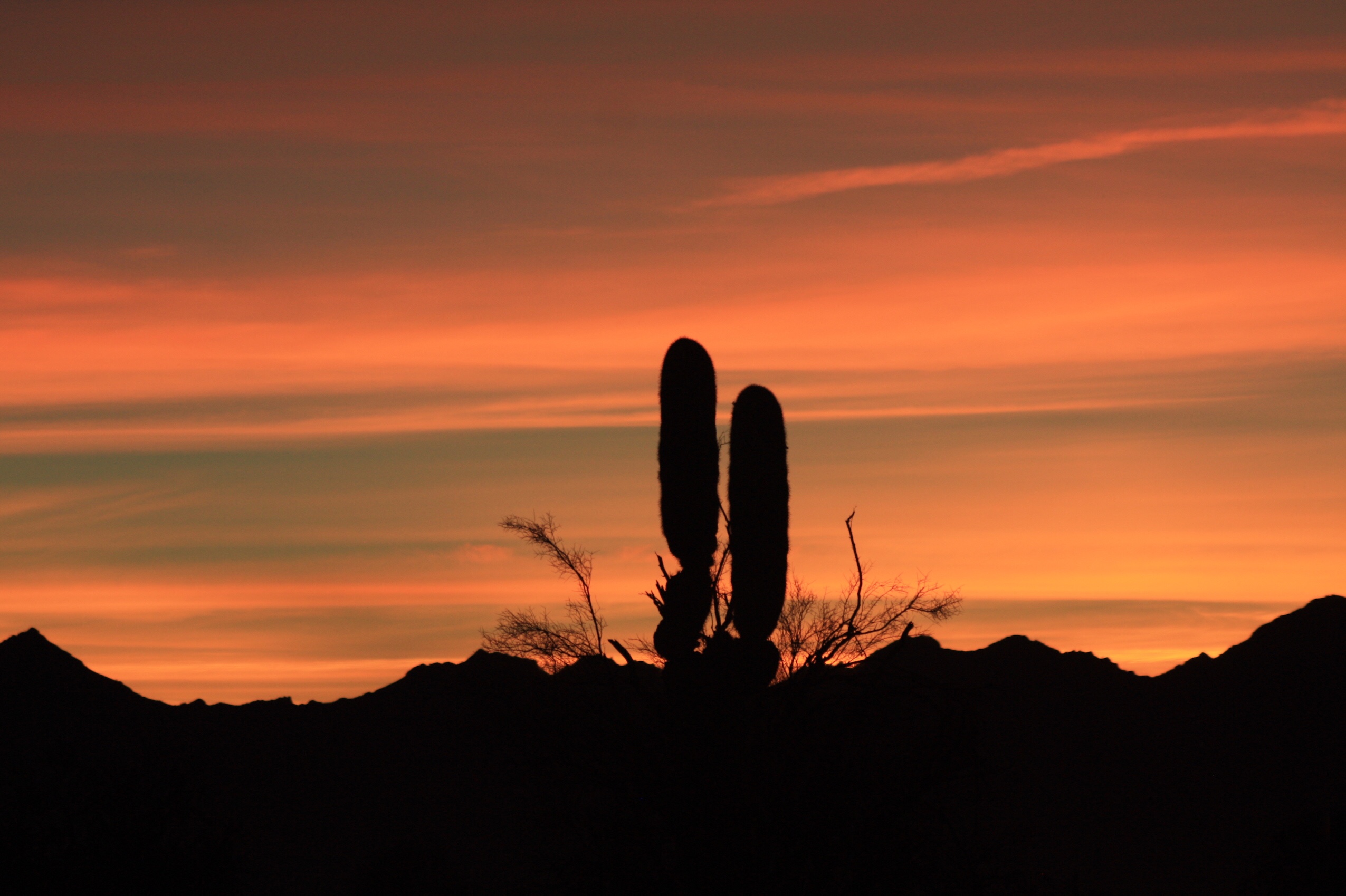 Looking forward to a nice warm day again today. Temps are supposed to be a high of 22C. (72F). I’m headed into town to get the lift struts and I think Kim is going to do a little bookkeeping work this morning. We’re here til Friday or thereabouts and then maybe we’ll head towards Yuma I think.

OK, I think that’s it for now. Have a great day!

This morning we headed out for a drive to Lake Havasu. It’s about a 90 min. drive from where we are south of Quartzsite. The drive was very nice. Once we got about 10 miles past Quartzsite the terrain became more rugged. There were a lot more hills and it seemed like we were winding through small mountains. We first past through part of Parker, Arizona and then continued up towards Lake Havasu.

Does anyone know what Lake Havasu is famous for? Those of you who have already been to Arizona probably already know. The answer is London Bridge. In 1962, the city of London England sold the famous London Bridge to an American businessman named Robert McCulloch. He planned to dismantle the Bridge, move it to the middle of the Arizona desert and build a town around it. Most people thought he was crazy.

London Bridge was built in the 1830’s and had, over time, become structurally unsound for motor traffic. Remember the old song “London Bridge is falling down, falling down, falling down”? The old London Bridge was an icon of London. So Mr. McCulloch brought the Bridge for $2.7 million, and in 1967 his crew began to remove the granite stone sheathing from the Bridge and marked each block so that they could be reassembled again in Arizona. The construction of the bridge in Arizona began in 1968 and was completed in 1971. As turned out, Robert McCulloch was right. People did come and Lake Havasu has become a prime tourist attraction. Many people live there and it has become a popular destination for snowbirds in the winter.

We went almost directly to the Bridge. Parking was easy and we spent some time wandering around the Bridge area and taking pictures. There is a tourist information centre right there as well. And…… right across the road there was an In-n-Out Burger restaurant. We didn’t want to pass up an opportunity to have an In-n-Out Burger so we stopped there for lunch.

We drove to the north end of Lake Havasu to check out an AOR Park called Lake Havasu RV Resort. It looked very nice from the road. We might be back here to stay for a few days before we return to Ontario.

On our way back to Quartzsite we took a side trip to see the Parker Dam. It was just a couple of miles out of the way. We were able to drive across the Dam itself but the road was very narrow. No trucks or RV’s allowed. The weight restriction was 20 tons but the width of the road was the biggest problem. Built on the Colorado River, the dam was completed in 1938 and is 328 ft. high; 235 ft. of that is below the riverbed. It is actually the highest dam in the world. It was an interesting stop.

Back on the road, and headed home we arrived just in time for happy hour and enjoyed chatting with the group for a couple hours.

We had a very nice day today. Oh, and I forgot to mention, the high temp today was 75F or 23C for us Canadians. That’s it for today, hope you like the pictures.

Well here it is Thursday already in our first week at Quartzsite. We arrived on Saturday, and so far our stay has been great. We are camped about 5 miles from town out in the desert in the La Posa South LTVA (long term visitor area).

Sunday morning we drove into the town of Quartzsite to see the RV show in the big tent. We arrived early enough that we were able park very close to the show. There were lots vendors there and most were RV related. Even early in the day it’s starting to get a little crowded. It took us an hour or so to tour the tent and wander around a little outside. We drove around the town a little and then headed back out to our campsite. Started to get very busy in town. Relaxed at our site for a bit and then Happy Hour began at 3:30. I’ll cover the next few days in this post as well.

Monday I (Ken) took a drive into town to explore a little more a little after 10 am. Wow, what a zoo. So many people. The traffic entering the town was backed up for at least a half mile. George (Yates), a friend we know from our home park Rock Glen, had told me that there was more to see in town than we had seen on Sunday so I explore a little more. There are an incredible number of RV parks in the town. When I headed back out to the camp area the line extended well beyond the entrance to La Posa, so it had to be at least 5 1/2 miles long…wow. The winds have picked up here while I was away.

Wednesday Kim and I headed back in town (early) to go to the flea market and we also toured a bunch of diesel Class A RV’s. New and used. It was interesting but there were only 1 or 2 that caught our eye. Too pricey for us though, but we like to look. I have taken a few pictures while we’ve been here so I’ll add them to this post.

I stood on top of our RV to get a couple pictures. You can see lots of RV’s in the distance. That’s only a drop in the bucket compared to how many are in the area.

It took me a while today to setup this blog and to figure it all out. I’m sure I will get better at it, but for now I’m all blogged out. Hope you somewhat enjoyed my first attempt.

Thanks for joining us!

https://journeywithkenandkim.home.blog
Travels with Bentley
WHERE ARE THE DIXONS TODAY?
In the Shadows
Cargo Muchacho Mountains in California
Living the Dream...
Our View From Here
TRAVEL WITH THE BAYFIELD BUNCH:))
On a long and lonesome highway....
Seeing America with Ken and Shirley
Barb And Bill do America
Marlene and Benno's Odysseys on Land and Water
Travel with Kevin and Ruth
On Our Way
It's about time.
Celebrating the Dance
Chillin' with Patsy
Our Awesome Travels
Journey with Ken and Kim
Loading Comments...