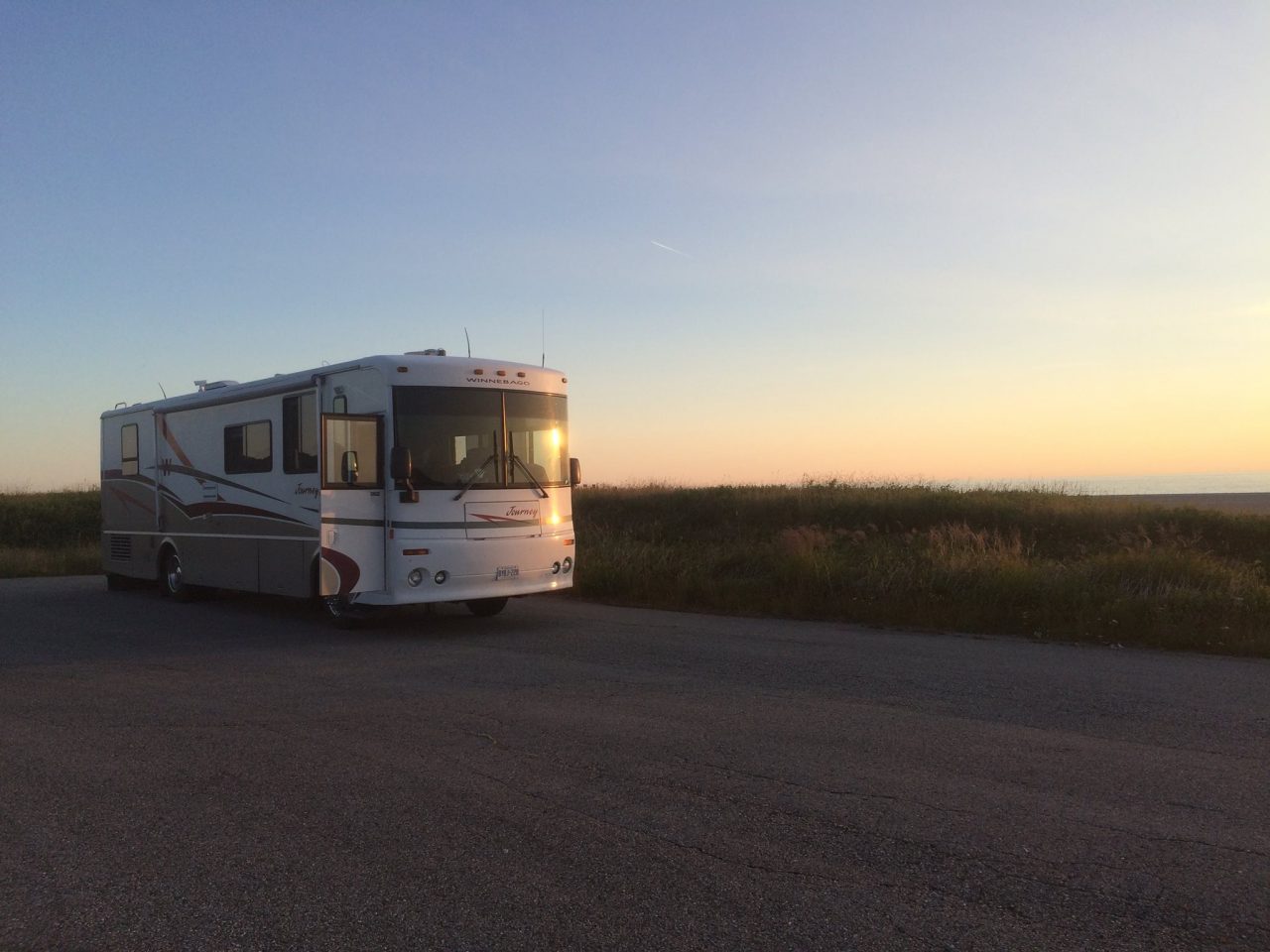 Last evening (Tuesday) it was very mild outside. Somewhere around 20ºC (70ºF). About 10:30 or 11:00 pm the winds picked up. Very strong gusts as well. By morning the temperature had cooled off drastically. While I outside getting everything ready to travel our neighbour RVer was doing the same so we chatted for a bit. They are also on their way to Arizona. They are staying at another campground in Yuma just down the road from Pilot Knob. I think they were spending some time in Texas as well before heading further west. We were on the road around 9:00AM and with a little sun to start out. Travelling west on I-30 the traffic was noticeably lighter than the day before. We headed west to Sulphur Springs and then southwest on Hwy 19 towards Canton. Just past Canton we pulled off into a church parking lot and had some lunch. Only about 20 miles left to travel. Wes and his friend Steve met us at an Exxon Gas Station just down the road from his place and they led the way into Mabank to the Municipal campground. Steve made arrangements for us to stay there with the local Police department. This spot is also a municipal park. There is a huge gravelled area with full hookups for Rv’s. I think Steve arranged for all the services to be turned on for our visit. Such a nice thing to do for us. Steve modestly calls it “Texas hospitality”. So we have this huge area all to ourselves. We could have huge gatherings of RV’s here. Mabank is a neat little town. Its about 30 + minutes from Dallas has a nice small town feeling about it and is situated near a fresh water lake. It definitely is a friendly town. We stayed here on our way home in March and when we were getting ready to leave the Police Chief stopped by to wish us safe travels.

We spent the afternoon and early part of the evening at Wes’s place catching up with all the news. Last year when we were here it was quite wet but much dryer this time around. Wes took us on a hike around his place. He has a large beautiful wooded area at the rear of his property that is pretty much undisturbed. Very nice!

In Canton this weekend is a huge Flea Market called “First Monday Trade Days”. It happens over the first weekend of every month of their season. This is the last show of the year and it’s usually the biggest. It looking like the weather may not cooperate this weekend though. Some cooler temperatures and some rain in the forecast. Wes has become a scrap metal artist in the last few years. He’s made some really neat pieces and he is usually a vendor at First Monday. Hopefully the weather will improve a little and we’ll all head up to the sale on the weekend. It’s known as the world’s largest flea market with as many as 5000 vendors. We’re looking forward to seeing it first hand.

Thursday we headed over to Wes’s after lunch to watch some Thanksgiving Day Football. Well Wes and I did but I think Kim was a little bored with that. Wes made us some homemade Chili for supper. It was very good.

Friday morning Wes, Kim and I headed off to the Canton Flea Market. We spent a couple hours wandering around checking things out. Kim found a few things she was interested in and made a couple purchases. We stopped for lunch part way through and had some street tacos and fresh made curly potato chips. The market was a little light on vendors. Could have been that it was Thanksgiving weekend or it could have been the weather. There were a few light sprinkles in the morning. Later in the afternoon Wes and I gave his neighbour Steve a hand to get his well working. There was a broken pipe, so with a quick trip to the local hardware store for a couple parts we had the pump working just as dark was setting in.

Saturday, Wes suggested that we go for a drive into Arlington and Fort Worth. Steve joined us for the drive. We drove by Wes’s old workplace, the General Motors Arlington Assembly Plant. It’s a huge operation, and it makes Cami Assembly in Ingersoll look rather small. Also we passed by AT&T Stadium, the home of the Dallas Cowboys. Our next stop was the Amon Carter Museum in Fort Worth. This museum is the home of many Frederic Remington and Charles Russell paintings and sculptures. A very nice stop. Of course there were other artists featured but those were the ones we went to see especially.

Our next destination was to go to Fort Worth to the Stockyards. I had no idea what the Stockyards were. It’s actually a very neat part of town. Old streets, old buildings, cobblestone roads and bars and restaurants and shops. I had never heard of it before, but if you’re ever in Fort Worth I would say it’s a must see. We stopped for some refreshments in the Stockyards Hotel. Next, on our way back to Wes’s we stopped for some Texas BarBQ at Rudy’s. It was very good but I would rate it second to the one Wes took us to in January when we were through here last winter.

Sunday was just a relaxing day. In the afternoon we drove to Wes’s and just kind of hung out. Watched a little football and visited with each other. Kim did a load of laundry and we left to go back to the RV late afternoon. We always enjoy spending time with Wes. He’s a great host. Thanks Wes!!

Well Monday we’re back on the road. So I’ll wrap up this post. We’re headed to Arizona now. I’ll catch y’all up on the next post.

12 thoughts on “Spending a Little Time in Texas”

https://journeywithkenandkim.home.blog
Travels with Bentley
WHERE ARE THE DIXONS TODAY?
In the Shadows
Camp near Pilot Knob, California
Living the Dream...
Our View From Here
TRAVEL WITH THE BAYFIELD BUNCH:))
On a long and lonesome highway....
Seeing America with Ken and Shirley
Barb And Bill do America
Marlene and Benno's Odysseys on Land and Water
Travel with Kevin and Ruth
On Our Way
It's about time.
Celebrating the Dance
Chillin' with Patsy
Our Awesome Travels
Journey with Ken and Kim
Loading Comments...
%d bloggers like this: